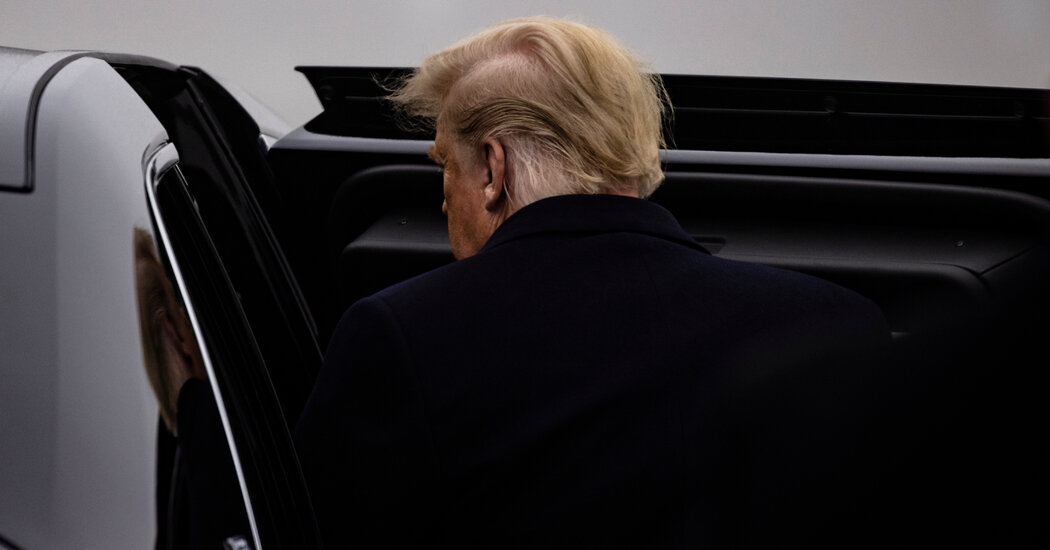 WASHINGTON — As President Trump prepares to leave office in days, a lucrative market for pardons is coming to a head, with some of his allies collecting fees from wealthy felons or their associates to push the White House for clemency, according to documents and interviews with more than three dozen lobbyists and lawyers.

The brisk market for pardons reflects the access peddling that has defined Mr. Trump’s presidency as well as his unorthodox approach to exercising unchecked presidential clemency powers. Pardons and commutations are intended to show mercy to deserving recipients, but Mr. Trump has used many of them to reward personal or political allies.

The pardon lobbying heated up as it became clear that Mr. Trump had no recourse for challenging his election defeat, lobbyists and lawyers say. One lobbyist, Brett Tolman, a former federal prosecutor who has been advising the White House on pardons and commutations, has monetized his clemency work, collecting tens of thousands of dollars, and possibly more, in recent weeks to lobby the White House for clemency for the son of a former Arkansas senator; the founder of the notorious online drug marketplace Silk Road; and a Manhattan socialite who pleaded guilty in a fraud scheme.

Mr. Trump’s former personal lawyer John M. Dowd has marketed himself to convicted felons as someone who could secure pardons because of his close relationship with the president, accepting tens of thousands of dollars from a wealthy felon and advising him and other potential clients to leverage Mr. Trump’s grievances about the justice system.

A onetime top adviser to the Trump campaign was paid $50,000 to help seek a pardon for John Kiriakou, a former C.I.A. officer convicted of illegally disclosing classified information, and agreed to a $50,000 bonus if the president granted it, according to a copy of an agreement.

And Mr. Kiriakou was separately told that Mr. Trump’s personal lawyer Rudolph W. Giuliani could help him secure a pardon for $2 million. Mr. Kiriakou rejected the offer, but an associate, fearing that Mr. Giuliani was illegally selling pardons, alerted the F.B.I. Mr. Giuliani challenged this characterization.

After Mr. Trump’s impeachment for inciting his supporters before the deadly riot at the Capitol, and with Republican leaders turning on him, the pardon power remains one of the last and most likely outlets for quick unilateral action by an increasingly isolated, erratic president. He has suggested to aides he wants to take the extraordinary and unprecedented step of pardoning himself, though it was not clear whether he had broached the topic since the rampage.

He has also discussed issuing pre-emptive pardons to his children, his son-in-law and senior adviser, Jared Kushner, and Mr. Giuliani.

Legal scholars and some pardon lawyers shudder at the prospect of such moves, as well as the specter of Mr. Trump’s friends and allies offering to pursue pardons for others in exchange for cash.

“This kind of off-books influence peddling, special-privilege system denies consideration to the hundreds of ordinary people who have obediently lined up as required by Justice Department rules, and is a basic violation of the longstanding effort to make this process at least look fair,” said Margaret Love, who ran the Justice Department’s clemency process from 1990 until 1997 as the United States pardon attorney.

There are few historical parallels. Perhaps the closest occurred in the final hours of Bill Clinton’s administration when he issued 170 pardons and commutations, some of which went to people who paid six-figure sums to his family and associates. But even Mr. Clinton, who was seen as flouting protocols, mostly rewarded people who had gone through an intensive Justice Department review process intended to identify and vet the most deserving recipients from among thousands of clemency applications.

Mr. Trump has shunned that process more than any recent president, creating an ad hoc system in the White House run by Mr. Kushner and relying on input from an informal network of outside advisers, including Mr. Tolman. That system favors pardon seekers who have connections to Mr. Trump or his team, or who pay someone who does, said pardon lawyers who have worked for years through the Justice Department system.

Few regulations or disclosure requirements govern presidential clemency grants or lobbying for them, particularly by lawyers, and there is nothing illegal about Trump associates being paid to lobby for clemency. Any explicit offers of payment to the president in return could be investigated as possible violations of bribery laws; no evidence has emerged that Mr. Trump was offered money in exchange for a pardon.

Some who used resources or connections to try to get to Mr. Trump say clemency should be granted to more people, independent of their clout.

“The criminal justice system is badly broken, badly flawed,” said the former senator, Tim Hutchinson, a Republican who served in Congress from 1993 to 2003. He has paid Mr. Tolman at least $10,000 since late last year to lobby the White House and Congress for a pardon for his son Jeremy Hutchinson, a former Arkansas state lawmaker who pleaded guilty in 2019 to accepting bribes and tax fraud, according to a lobbying disclosure filed this month.

Mr. Hutchinson said the $10,000 was only for lobbying and acknowledged Mr. Tolman may have performed legal services not reflected in the disclosure. While Mr. Hutchinson said he was happy with Mr. Tolman, he added, “There is a lot of people deserving of mercy, and I hope the president has a wide net in his approach to pardons and clemency.”

Mr. Tolman, who did not respond to requests for comment, is a former United States attorney in Utah appointed by President George W. Bush. He was a leading supporter of legislation overhauling sentencing laws championed by Mr. Trump and Mr. Kushner and was invited to the White House signing ceremony in December 2018. Since then, Mr. Tolman has emerged as a prominent advocate for clemency requests, with his firm’s website highlighting a White House statement crediting him with helping secure pardons or commutations for three people, including Mr. Kushner’s father, a wealthy real estate developer who was convicted of tax evasion, witness tampering and campaign finance violations.

The White House has also credited Mr. Tolman with helping less well-connected offenders win clemency. There are no public records indicating Mr. Tolman was paid for those efforts, and Mr. Tolman wrote on Twitter on Friday that he has “represented many to get clemency. Some have been paying clients, many have been pro bono. I’m proud of my team’s clemency work.”

He filed paperwork this month indicating he was paid $20,000 in the last three months of last year to seek a commutation for Dina Wein Reis, who pleaded guilty in 2011 to conspiracy to commit wire fraud. Ms. Reis, who was released from prison in 2014, did not respond to requests for comment.

A filing this month revealed that Mr. Tolman was paid $22,500 by an Arizona man named Brian Anderson who had retained him in September to seek clemency for Ross Ulbricht, the Silk Road founder. Mr. Ulbricht was sentenced to life in prison in 2015 for engaging in a continuing criminal enterprise and distributing narcotics on the internet.

Another lobbyist who has advertised his connections to Mr. Trump, Mark D. Cowan, was part of a team hired after the election to seek clemency for Nickie Lum Davis, who pleaded guilty in August for her role in a covert campaign to influence the Trump administration on behalf of Chinese and Malaysian interests.

Weeks after stepping down as the president’s lawyer in 2018, Mr. Dowd began marketing himself as a potential conduit for pardons. Mr. Dowd told prospective clients he could help them receive pardons because of his access to Mr. Trump and top aides like Mr. Kushner.

Mr. Dowd, who as the president’s lawyer had dangled a pardon to stop Mr. Trump’s former national security adviser from cooperating with investigators, had continued to informally advise Mr. Trump. He told would-be clients and their representatives that the president was likely to look favorably on petitioners who were investigated by federal prosecutors in Manhattan or tarnished by perceived leaks from the F.B.I. At the time, Mr. Trump was seeking to undermine those groups because they were investigating his conduct.

After leaving the Trump legal team, Mr. Dowd began representing William T. Walters, a wealthy sports gambler in Las Vegas convicted of insider trading. Around that time, Mr. Dowd told Mr. Walters and others that he would soon obtain a pardon for his client using his access to the White House and because Mr. Walters had been investigated by prosecutors in Manhattan and the F.B.I..

Mr. Walters paid Mr. Dowd tens of thousands of dollars, but a pardon has yet to materialize.

Mr. Dowd denied that he had boasted to anyone about his ability to obtain pardons and declined to answer questions.

The former Trump campaign adviser, Karen Giorno, also had access to people around the president, having run Mr. Trump’s campaign in Florida during the 2016 primary and remaining on board during the general election

She met in 2018 with Mr. Kiriakou, who pleaded guilty in 2012 to illegally disclosing the name of a C.I.A. officer involved in the waterboarding of an American detainee. Though the name was never publicly disclosed, Mr. Kiriakou was sentenced to 30 months in prison. In the meeting, at the Washington office of his lawyer, Mr. Kiriakou said he had been wronged by the government and was seeking a pardon so he could carry a handgun and receive his pension.

President Trump has discussed potential pardons that could test the boundaries of his constitutional power to nullify criminal liability. Here’s some clarity on his ability to pardon.

Ms. Giorno was accompanied by Mr. Trump’s former director of advance, George Gigicos. Both said they had direct lines to the president, Mr. Kiriakou said.

“I wanted to believe them,” he said.

Ms. Giorno disputed this account, saying neither she nor Mr. Gigicos bragged about their presidential access. She said Mr. Gigicos was not involved in her effort, which she said was motivated by a feeling that “it was unfair what happened” to Mr. Kiriakou.

In July 2018, Ms. Giorno signed an agreement with Mr. Kiriakou, a copy of which was obtained by The New York Times, “to seek a full pardon from President Donald Trump of his conviction” for $50,000 and promised another $50,000 as a bonus if she secured a pardon.

Mr. Kiriakou said he also broached his quest for a pardon during a meeting last year with Mr. Giuliani and his associates on another subject at the Trump International Hotel in Washington, which involved substantial alcohol.

Mr. Kiriakou said he did not pursue the arrangement, but he shared the anecdote at a party last fall. A friend, a Transportation Security Administration whistle-blower and former air marshal named Robert J. MacLean, became alarmed and feared Mr. Giuliani might be selling pardons.

Without telling Mr. Kiriakou, Mr. MacLean filed a report with the F.B.I. “I felt duty-bound to report it,” Mr. MacLean said. Neither he nor Mr. Kiriakou heard from the authorities.

Mr. Giuliani rejected the portrayal of events, saying that he did not remember meeting with Mr. Kiriakou and that none of his associates would offer his services as a pardon broker because he had made clear that he did not work on clemency cases as a result of his representation of Mr. Trump.

“It’s like a conflict of interest,” Mr. Giuliani said. He said he had heard that large fees were being offered, “but I have enough money. I’m not starving.”

Mario Gabelli made practically 6,200% on stake in Buffett’s Berkshire

Local Alice - February 20, 2021
0
"It really had an impact on the elections," Trump said at the celebration in the East Room. “People knew me very well, but...