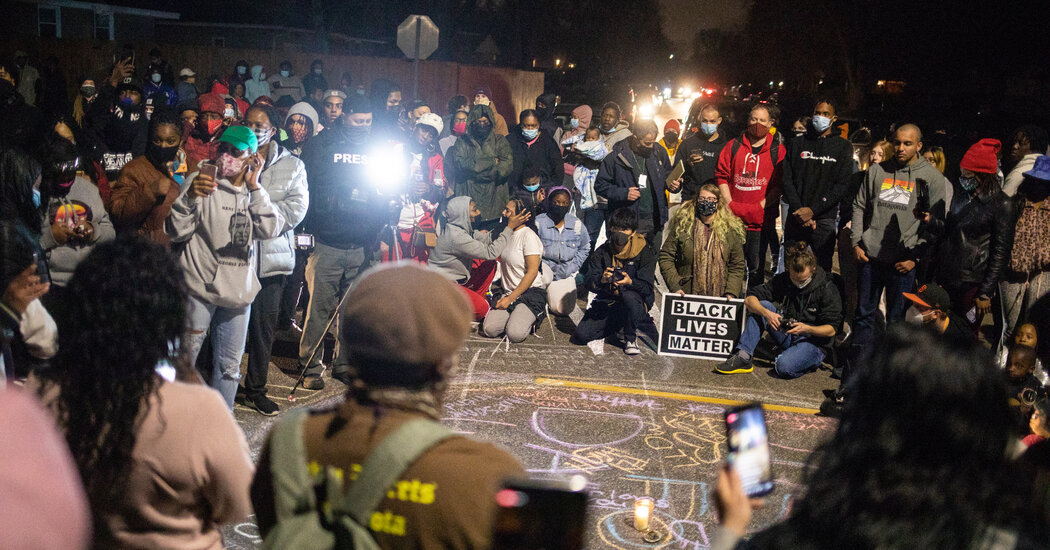 BROOKLYN CENTER, Minn. – A 20-year-old black man died after a police officer shot him on Sunday during a traffic obstruction in a Minneapolis suburb, sending hundreds of people onto the street where they clashed with police officers until Monday morning.

The protests at the Brooklyn Center came hours before day 11 of the trial of Derek Chauvin, a former Minneapolis police officer charged with the murder of George Floyd, about to begin in a courtroom less than 10 miles away.

Outside the Brooklyn Center Police Department, smoke rose in the air on Sunday night as a line of police officers fired rubber bullets and chemical agents at protesters, some of which hurled rocks, garbage bags and water bottles at the police. The Brooklyn Center Mayor ordered a curfew until 6 a.m.

The shooting brought more frustration and fear to the Twin Cities area, where the death of Mr. Floyd and the devastating protests that followed cast a spell on residents as they await a verdict in the chauvinist trial.

Brooklyn Center Police Department chief Tim Gannon said an officer shot and killed the man Sunday afternoon after stopping his car for a traffic violation and discovering that the driver had an arrest warrant against him. When the police tried to arrest the man, he stepped back in his car. At that point, an officer shot him dead, Chief Gannon said.

The man’s car then drove several blocks and hit another vehicle, whereupon the police and medical staff pronounced him dead. Chief Gannon gave no information about the officer who fired or said how serious the accident had been, although the passengers in the other car were not injured. The chief said he believed the officers’ body cameras were turned on during the shooting.

A woman who said she was the victim’s mother identified him as Daunte Wright, 20. Mrs. Katie Wright told reporters that her son drove a car that his family gave him two weeks ago when he was them called he was run over.

“He said they pulled him over because he had air fresheners on his rearview mirror,” she said. Ms. Wright added that her son was driving with his girlfriend when he was shot. Police said a woman in the car was injured in the accident, but her injuries were not life threatening.

John Harrington, the Minnesota Department of Public Security commissioner, said the riots after Mr. Wright’s death had spread to a mall in Brooklyn Center and people broke into about 20 businesses there. By midnight, most of the protesters had fled the police station when National Guard troops and Minnesota State Patrol officers arrived to provide riot gear and batons to police officers standing around the building.

Governor Tim Walz, a Democrat, wrote on Twitter that he was praying for Mr. Wright’s family “while our state mourns another life for a black man taken by law enforcement agencies.”

Chief Gannon said he asked the Minnesota Bureau of Criminal Apprehension, the agency that led the investigation into Mr. Floyd’s death, to investigate the shooting.

The shooting comes after two weeks of testimony in the trial of Mr Chauvin, who is white and exposed the pain caused by the death of Mr Floyd, a black man, in Minneapolis. The jury heard from people who witnessed Mr. Floyd’s arrest, medical experts who described his death, and police officers – including the Minneapolis Police Chief – who condemned Mr. Chauvin’s actions. And the graphic video of Mr. Chauvin kneeling on Mr. Floyd for more than nine minutes was played repeatedly. Testimony is expected to resume on Monday around 9:15 a.m.

Many Minneapolis businesses have had planks over their windows since shortly after Floyd’s death on May 25, when protests rocked the city for days and numerous businesses burned to the ground. And black residents in and around Minneapolis are still concerned about the police, said Wynfred Russell, a council member in Brooklyn Park, another suburb that was broken into some shops on the Sunday after the shooting.

“You have a lot of raw nerves here,” he said.

Ms. Wright, the victim’s mother, said when her son called her during the traffic obstruction, she asked him to give his phone to a police officer so she could give the insurance information.

“Then I heard the policeman come to the window and say, ‘Put the phone down and get out of the car,” she said.

She said her son dropped or hung up the phone whereupon she heard “shuffling” and an officer told Mr. Wright not to run. Then, she said, someone hung up. When she called back, her son’s friend replied, telling her that he had been shot.

At an earlier protest and vigil near the place where Mr. Wright died, his mother urged protesters to be peaceful.

“We want justice for Daunte,” she said. “We don’t want it to be about all this violence.”

But hours later, outside the Brooklyn Center Police Department, protesters were singing and throwing things at police officers who were getting closer to the building until they were pushed back when police officers fired projectiles that burst with a loud bang and gas that hit their throats and eyes burned. The gas reached several apartment buildings across the street where families said they had been rocked by the conflict in their front yards.

“We had to close the doors because everything was in my house,” said Tasha Methercutt, a woman who lives in one of the apartments, about the gas fired by the police. She said there were four children in her home during the riot, including a two-year-old.

Kimberly Lovett, who until recently had been the caretaker for the four apartment buildings near the police station, said she drove to the area to check on her former tenants and to show her frustration with the police.

“There are children in all these buildings,” she said, pointing to the apartments’ balconies, some of which had children’s toys on them. “We’re sick of the police killing young black men all the time.”