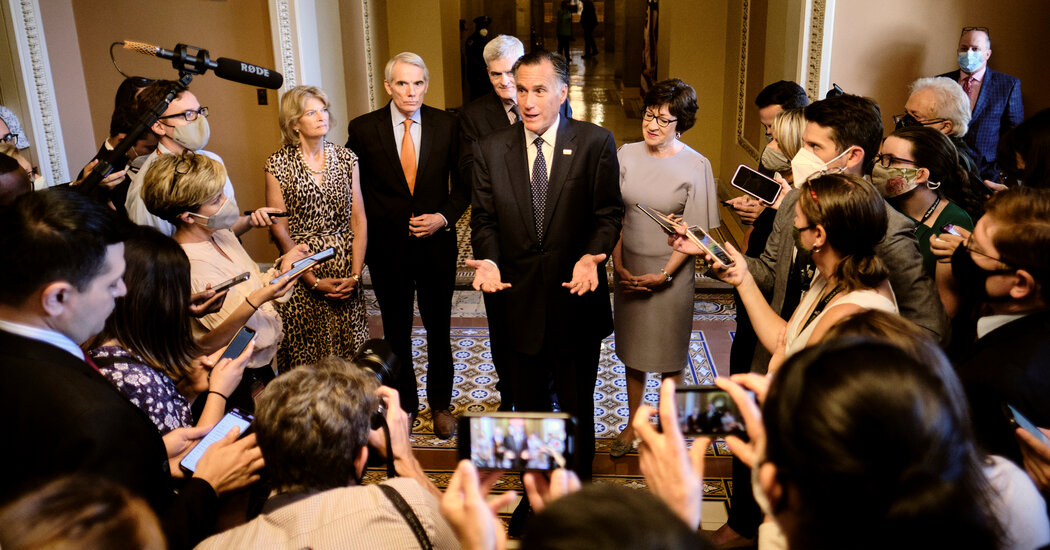 The White House and a bipartisan group of senators agreed on a sweeping infrastructure bill on Wednesday, and Democrats pushed for a vote to be scheduled for Wednesday evening to pave the way for action on a crucial item on President Biden’s agenda.

“We now have an agreement on the most important issues and are ready to move forward,” said Senator Rob Portman, Republican from Ohio and one of his party’s leading negotiators on the infrastructure measure.

On a tour of a truck manufacturing facility in Pennsylvania, Mr. Biden was optimistic about the upcoming deal and told reporters, “I’m confident.”

The proposal was supposed to fill out the details of a draft that the group triumphantly announced at the White House in late June but haggled for weeks as they struggled to translate it into law while holding their fragile coalition together.

According to a fact sheet released Wednesday afternoon by the White House, the resulting bill would provide around $ 550 billion in new federal funding for roads, bridges, rails, transit, water and other physical infrastructure programs.

Many of its spending provisions are unchanged from the original framework announced last month. But it seemed to reduce spending in a few areas, including reducing public transportation funding from $ 49 billion to $ 39 billion and getting rid of a $ 20 billion infrastructure bank that was supposed to catalyze private investment in large projects.

The infrastructure bank’s loss appeared to cut funding in half for electric vehicle charging points, which administrative officials said were included in the original agreement, jeopardizing Mr Biden’s promise to create a network of 500,000 charging points nationwide.

The new deal significantly changes the way infrastructure spending is paid after Republicans opposed a pillar of the original framework: increased revenue from an IRS crackdown on tax fraud that was supposed to cover nearly a fifth of the plan’s funding .

Instead, negotiators agreed to recycle more than $ 250 billion from previous Covid relief laws, including $ 50 billion from expanded unemployment benefits that were prematurely cut by two dozen Republican governors this summer, according to a data sheet verified by the New York Times . That’s more than double the money reused in the original deal.

The new deal would save $ 50 billion by postponing a Medicare rebate rule passed under President Donald J. Trump and raise nearly $ 30 billion through the application of tax information to cryptocurrencies. She also suggests getting back $ 50 billion in fraudulently paid unemployment benefits during the pandemic.

Republicans stopped the Senate from moving forward with the plan last week, saying there were too many issues unresolved. Comments from Mr. Portman and those of other Republicans in the group, speaking after meeting Senator Mitch McConnell of Kentucky, the minority leader, indicated that they had removed major obstacles to an agreement.

It remained unclear whether enough Republicans would join the five core negotiators to drive the move forward, although some GOP senators outside the group signaled they were ready to move forward.

“It’s not perfect, but I think it’s in a good place,” said North Carolina Republican Senator Thom Tillis, who would vote to include it.

Some Senate Democrats, including at least one key committee chairman, said they would still review the plan before deciding whether to support it.

“We’re very excited about a deal,” Arizona Senator Kyrsten Sinema, a key Democrat negotiator, told reporters. “Everyone was amazing and has been doing this job for many months.”

On Wednesday before, Senator Chuck Schumer, Democrat of New York and majority leader, had also expressed optimism and said that a test vote on the measure could take place on Wednesday evening.

If the compromise holds, the Democrats will have to maneuver it through the evenly divided Senate via a Republican filibuster that will require the support of all 50 Democrats and Independents and at least 10 Republicans. That could take at least a week, especially if Republicans choose to slow the process down. Should the move be approved by the Senate, it will also have to pass through the House of Representatives, where some Liberal Democrats were reluctant to take on the emerging details.

But the five Republicans who led the deal with the Democrats – Mr. Portman and Senators Susan Collins from Maine, Lisa Murkowski from Alaska, Bill Cassidy from Louisiana, and Mitt Romney from Utah – urged their colleagues to support a measure which, in their opinion, would be desperately needed funding for infrastructure projects across the country.

“I’m amazed that there are some who are against it just because they think that if you ever achieve something, it is a sign of weakness,” said Cassidy, describing the needs of his constituents. “We will not postpone solving your problem.”

Mr. Romney made a distinction between the upcoming agreement and a larger budget package of $ 3.5 trillion, which the Democrats want to push through unilaterally through both houses against the objections of the Republicans. California spokeswoman Nancy Pelosi said she won’t pass the bipartisan infrastructure bill in the House of Representatives until this second package – which is expected to pour billions into programs to fight climate change, health care, childcare and education – reaches the Senate adopted.

“I love this bill; I can’t stand the other, ”said Mr. Romney, citing inflation concerns. “I am confident that we will make it over the finish line.”

Kati Kariko Helped Protect the World From the Coronavirus

Science Alice - April 8, 2021
0
She grew up in Hungary, daughter of a butcher. She decided she wanted to be a scientist, although she had never met one. She...

Tech Alice - April 9, 2021
0
The vote could lead to a rethinking of strategy within the labor movement.For years, union organizers have tried to use growing concerns about low-wage...