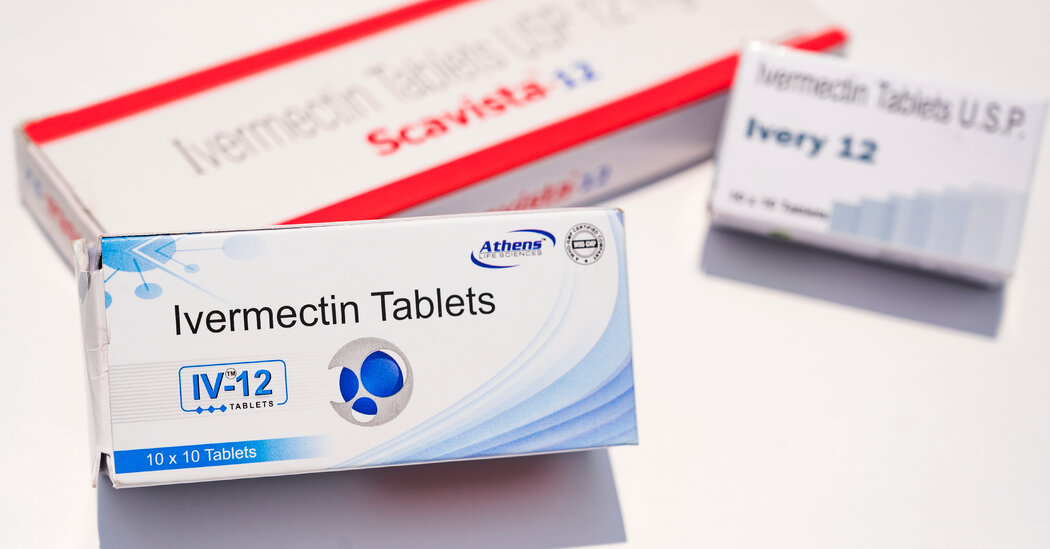 Dr. Gregory Yu, an emergency doctor in San Antonio, has received the same daily inquiries from his patients last week, some vaccinated against Covid-19 and some unvaccinated: asking him about ivermectin, a drug that is typically used to treat parasites it uses worms that have repeatedly failed clinical trials to help people infected with the coronavirus.

Dr. Yu has turned down the ivermectin requests, he said, but he knows some of his colleagues haven’t. Prescriptions for ivermectin have risen sharply in recent weeks, rising to more than 88,000 per week in mid-August from a pre-pandemic base average of 3,600 per week, according to researchers at the Centers for Disease Control and Prevention.

Some pharmacists even report a shortage of the drug. Travis Walthall, a pharmacist in Kuna, Idaho, a city of about 20,000 residents, said he bottled more than 20 ivermectin prescriptions this summer alone, up from two or three in a typical year. He has not been able to get the drug from his suppliers for a week; they were all outside.

Mr Walthall is amazed at how many people are willing to take an unapproved drug against Covid. “I think my goodness this is awful,” he said.

While it is sometimes given in small doses to humans for head lice, scabies, and other parasites, ivermectin is more commonly used in animals. Doctors are sounding the alarm that more and more people are getting the drug from livestock centers, where it can be obtained in highly concentrated paste or liquid form.

According to CDC researchers, who cited data from the American Association of Poison Control Centers, calls to poison centers for ivermectin exposures increased dramatically, quintupling in July. The Mississippi Health Department said earlier this month that 70 percent of recent calls to the state poison control center were from people who had taken ivermectin from pet supply stores.

Dr. Shawn Varney, a toxicologist and medical director at the South Texas Poison Center, said his center received 191 calls in 2019 for exposure to ivermectin; So far this year the center has received 260 calls and is expected to reach 390 by the end of the year. The vast majority of recent calls have been from people who have taken a veterinary medicine to treat or prevent Covid-19.

“Everyone wants a cure for Covid because it’s such a devastating disease,” said Dr. Varney. “I beg people to stop using ivermectin and get the vaccine as it is the best protection we have right now. Everything else is risk after risk. “

Dr. Varney said that people who called the poison control center after taking ivermectin sometimes reported nausea, muscle pain, and diarrhea. He noted that there had been deaths from ivermectin overdoses in the past, although he was not aware of any specifically associated with Covid-19.

The greatest risk, he added, comes from people who ingest the animal product and take a dose far higher than what is human-appropriate – sometimes 10 to 15 times the amount a human-approved capsule could contain.

“People go to pet food stores and get a highly concentrated formulation because it’s for 1,000 pound animals,” said Dr. Varney. “You open yourself to great potential harm.”

Ivermectin was introduced as a veterinary medicine in the late 1970s, and its discovery of its effectiveness in combating certain parasitic diseases in humans won the 2015 Nobel Prize in Medicine.

Although it hasn’t been shown to be effective in treating Covid, people are now shouting for the drug and sharing tips on Facebook groups and on Reddit. Some doctors have compared the phenomenon to last year’s interest in hydroxychloroquine, although there are more clinical studies evaluating ivermectin.

The Food and Drug Administration weighed last week. “You’re not a horse,” the agency tweeted with a warning stating that ivermectin is not FDA approved for the treatment or prevention of Covid-19 and that ingesting large doses can cause serious harm.

A recent review of 14 ivermectin studies involving more than 1,600 participants found that there was no evidence of the drug’s ability to prevent Covid, improve patient conditions, or reduce mortality. Another 31 studies are still ongoing to test the drug.

“There is a lot of interest in reusing well-known, inexpensive drugs like ivermectin, which are readily available as oral tablets,” said Maria-Inti Metzendorf and Stephanie Weibel, the authors of the review, in an email to the Times. “Even if these circumstances seem ideal, the results of the clinical studies that have been carried out to date cannot confirm the benefits that have been advertised many times.”

One of the largest studies investigating ivermectin for the treatment of Covid-19, called the Together Study, was stopped on August 6 by the Data Protection Committee because it had shown that the drug was no better than a placebo for hospitalization or hospitalization prolonged hospital stays to prevent the emergency room. Dr. Edward Mills, a professor at McMaster University who led the study, which included more than 1,300 patients, said the team would have canceled it sooner had it not been for the public interest in ivermectin.

“The data security officer said, ‘This is pointless now and you are not offering any benefit to the patients involved in the study,'” said Dr. Mills.

Another study of the drug found that ivermectin could be quite benign if not taken in high doses. Dr. Eduardo López-Medina, a researcher at the Center for Pediatric Infectious Diseases in Colombia, led a randomized control study for the study of the effects of ivermectin last spring and found that it had no statistically significant effect on reducing the duration of Covid symptoms . However, he also found that there was no statistically significant increase in side effects in the patients who received ivermectin, despite taking a fairly high dose of 300 micrograms per kilogram.

“It seems like a safe drug, but that’s not enough to openly prescribe it,” said Dr. López Medina. “People should use it in studies, but not necessarily to treat patients. The data is not robust enough to support its use. “

Researchers and doctors are especially alarmed when people look to ivermectin as a possible prevention or treatment instead of getting one of the highly effective Covid vaccines. The FDA last week fully approved the Pfizer-BioNTech Covid vaccine for people 16 years and older, and Moderna’s vaccine is expected to be approved in the coming weeks.

“The only functional strategy we have to get a grip on Covid-19 is vaccination,” said Dr. Irwin Redlener, a New York doctor and founding director of the National Center for Disaster Preparedness at Columbia University. “When people fail to get vaccinated for nonsense they read on the Internet, it affects our ability to control this pandemic.”

Getting One Vaccine Is Good. How About Combine-and-Match?

Science Alice - March 31, 2021
0
In January, the UK made a change to its vaccination guidelines that shocked many health professionals: if the second dose of a vaccine were...

Science Alice - August 3, 2021
0
ERBIL, Iraq - When the Iraqi Prime Minister's plane landed in Baghdad last week after an official visit to the United States, its cargo...

Science Alice - July 9, 2021
0
Dead clams and clams covered rocks in the Pacific Northwest, their shells gaping open as if they had been cooked. Starfish were baked...