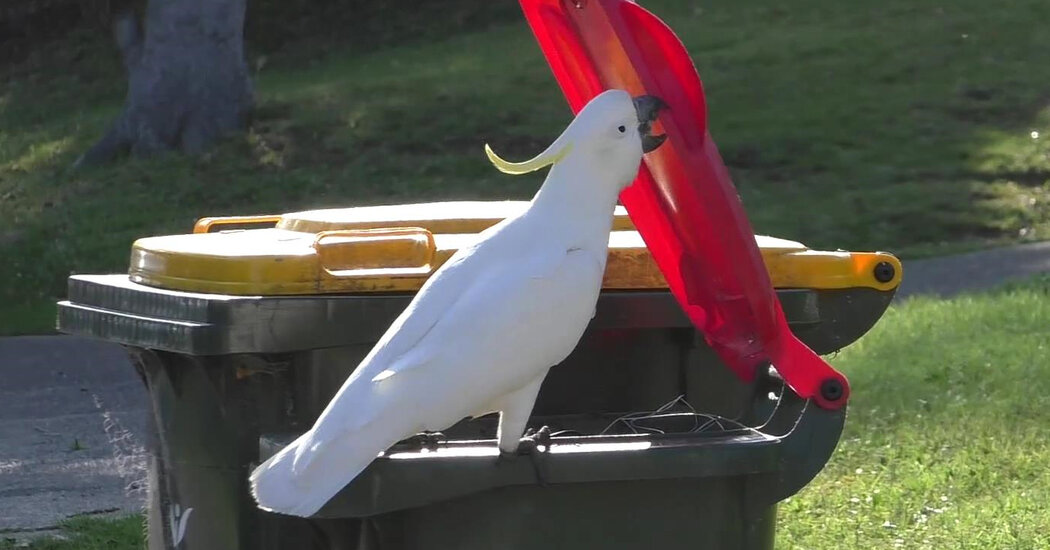 You’ve heard of garbage pandas: raccoons raiding the garbage. How about garbage parrots?

Sulfur-crested cockatoos, which may sound exotic to Americans and Europeans, can be found all over the Sydney suburbs. They have adapted to the human environment, and since they are known for skillfully manipulating objects, it is not entirely surprising that they were looking for a rich source of food. But it could be said that the spread of their latest trick of opening trash cans is destroying social learning and cultural evolution in animals.

The birds don’t acquire the skill just by imitating others, which is what social learning is. But the details of technology evolve to differ in different groups as innovation spreads, a mark of animal culture.

Barbara C. Klump, behavioral ecologist at the Max Planck Institute for Animal Behavior in Germany and first author of a report on cockatoo research in the journal Science, said: “It’s actually quite a complex behavior because it involves several steps. ”

Dr. Klump and her colleagues divided the behavior into five traits. First, a bird uses its beak to remove the lid from the container. Then, she said, “open it and then hold it and then walk down one side and then turn it over. And there are variations in each of these phases. “

Some birds go left, some right, they walk differently or hold their heads differently. The process is similar to the spread and development of human cultural innovations such as language or a classic example of animal culture, bird song, which can vary from region to region in the same species.

Dr. Klump and her colleagues in Germany and Australia recorded the spread of the behavior in the greater Sydney area over two years. The behavior became more common, but it did not show up in random places, like when different birds figured out the garbage can technique for themselves. It spread outward from its origin, suggesting that the cockatoos were learning how to do it from one another.

The cockatoos’ new ability opens up a whole new resource for the birds. This is an adaptive cultural evolution that spreads at lightning speed compared to biological evolution. Dr. Klump noted that culture is referred to as the second system of inheritance, and this applies to both humans and animals, which enables us and them to quickly adapt and change our behavior.

It is impossible to know which bird or birds first developed the garbage can technique, but apparently there isn’t a single cockatoo genius. During the course of the study, the behavior surfaced a second time in a suburb too far from the first for social learning to spread, said Dr. Lump. The technology was reinvented.

Scientists have observed social learning and what they call culture in primates, songbirds, and other animals. Different groups of chimpanzees show slightly different patterns of tool use, such as the cockatoos.

The researchers not only observed the different techniques in different areas. They also tagged and watched around 100 of the cockatoos to better understand individual behavior.

They found that about 30 percent of the birds tried to open the containers, and about 10 percent succeeded. Most of the successful birds were males. Dr. Klump said the men succeeded because they tend to be taller and perhaps better able to cope with the physical demands. Or it could be that they were of a higher rank and usually had first access to food.

But what about the birds that didn’t try to open the garbage cans? Were they just not smart or big enough? Not necessarily, said Dr. Lump, because as soon as the containers were opened, any cockatoo could join in and look for food without having done anything. Perhaps, she said, they had a strategy: “This bird can do this – I’ll just wait for you to open it.” Whether that’s true will be the subject of future research.

He said he was particularly interested in the larger, higher-ranking parrots that are doing the job of exploiting the new resource. “In primates,” he said, “the lower-ranking individuals need to find new ways to get food, while the stronger dominant individuals could simply suppress and exploit these ‘discoveries”. “

The first species of parrot known to open garbage cans was the New Zealand kea in a park setting. But in this case, said Dr. O’Hara, had people nipped cultural evolution in the bud.

“It would have been interesting to see how the kea would have evolved over time, but unfortunately the park wasn’t too happy about the garbage robberies and changed the garbage can covers.”

Outdoors Alice - June 29, 2021
0
Americans can now vacation in France, where the single-dose vaccination rate is 49 percent, according to the nonprofit Our World in Data. You...

Germany to Ban Most Journey from UK Over Variant Considerations

Outdoors Alice - May 22, 2021
0
Germany will ban most travel from the UK from Sunday as concerns exist about the spread of a coronavirus variant first discovered in India,...